Published by the Bytown Railway Society, Ottawa, ON 2001.  Still available, but they will soon all be gone. Your last chance to get the definitive history of this major southern Ontario pioneering railway at an outstanding value price - for order information please see below.
About the Canadian Railroad Historical Association (CRHA) Book Award:

Each year the CRHA invites nominations for awards in the categories of Lifetime Achievement, Preservation, an Article and a Book.

The Book Award is "in recognition of outstanding accomplishment", and the recipient of the Award receives a certificate from the Association to acknowledge the author's contribution to railway heritage.

For more information about the CRHA, please go to my LINKS (Railway History & Research).

About the Hamilton & North Western

Historically, this book is not only a tale of civic pride and ambition as Hamilton struggled to rival Toronto in its emergence as Ontario's Queen City, but from the perspective of early Ontario's tumultuous railway history, also a compelling summary of the reasons for the gradual transformation of 19th century railroading in Ontario. The ambitions of the Hamilton & North Western were a thorn in the sides of both the Grand Trunk and the Great Western as they duked it out for supremacy. Then, through its own politically and economically necessary merger with the Northern Railway of Canada to become the Northern & North Western Railway, it proceeded to heed the economic imperative of the budding transcontinental Canadian Pacific Railway project, and thus became a strategic property in the emerging bid of the Grand Trunk to keep the Canadian Pacific out of Ontario.

Hamilton's Other Railway features many unique, previously unpublished images from archival and other collections, along with great photographs from the Al Paterson, Dave Shaw, James Brown and Keith Sirman collections, and many other individual contributions, such as from the Gary Mauthe postcard collection, and the carefully researched track diagrams and the timeless photography of Bob Sandusky. All of these have been reproduced with singular care to provide a unique pictorial treasure trove of our railway past that reaches into all the communities that were touched by this railway; south from Hamilton to Port Dover via Caledonia, Hagersville and Jarvis; and north from Hamilton to Barrie via the Beach, Milton, Georgetown, Beeton and Allandale; with the branch from Beeton to Collingwood via Alliston and Creemore. Also included are the later services to Meaford and Port Rowan.

Hamilton's Other Railway is of broader application than its title suggests because of its detailed treatment of locomotive and station development in the GTR era. Of particular interest is the substantial chapter on the development of trestles, bridges and culverts from the railway's pioneer beginnings through to the technology of the CNR era. This is a comprehensive general reference source for architectural and engineering terminology, construction methods, techniques and practices; and therefore a practical guide for any kind of model railway project. Also included is a rare glimpse of the railway post office service.

Where to Buy the Book

$29.95, shipping and taxes included.
For overseas orders, please click here for a quotation.

Dealer terms: a minimum of any six books published by the Bytown Railway Society.


Click the play button on the player below for the first stanza of a song to commemorate the "Hog Special", created and produced by Fran and Anna Lee Webster, with research by Helen Emmett-Blackburn and Peter Coates, for the occasion of the opening of the replica station community centre at Creemore, Ont.

p 110 ACROSS THE BEACH TO GEORGETOWN
Caption under Pete Coletti picture: The view of Burlington Beach, looking towards Hamilton, in fact dates from 1896 when the Hamilton Radial Electric Railway was under construction. The spur from the GTR track provided temporary access to the newly constructed power house. (With thanks to John Ames.) 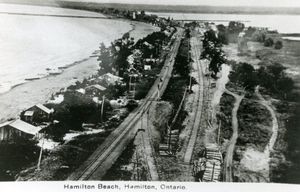 p 113 ACROSS THE BEACH TO GEORGETOWN
According to the Board of Railway Commissioners for Canada Judgments, Orders, Regulations and Rulings, Vol. X, No. 22, February 1, 1921, and the Hamilton Spectator (Sep 2, 1921), it was intended to divert the radial service over the GTR track during the 1921-22 reconstruction of the radial and road bascule bridge, but this did not in fact take place. The service operated to the canal from north and south. (With thanks to Tom Luton of the HRER website, the Hamilton Beach Community Forum and David O'Reilly.)

p 118/9 ACROSS THE BEACH TO GEORGETOWN
The crossing agreement with the GWR at Wellington Square was made on 16 November 1876.

pp 150/1 ACROSS THE BEACH TO GEORGETOWN
A GTR drawing office map dated 1903 confirms that there was a "union" station and that it was situated in the centre of the interchange curve, not short of the CPR underpass on the GTR mainline as described in the text. The interchange loop remained intact and operational until closure of the station in 1907. (With thanks to Ralph Beaumont). McMaster University Library.   http://digitalarchive.mcmaster.ca/islandora/object/macrepo%3A26997 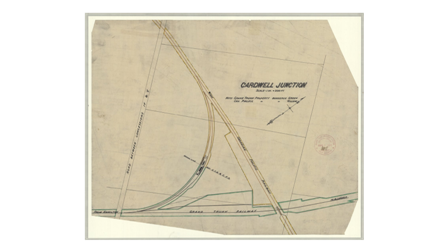 p 200 THE "HOG SPECIAL"
Caption Mrs. J. Galbraith picture) The fireman (on the far right) was not Gordon Dawson, but is believed to be Harry Ritchie. (With thanks to the late George Horner and Gordon Dawson.)

p 227 THE "HOG SPECIAL".
Caption: Infers that the building behind the lumber stack is the old (H&NW station) freight shed, but the freight shed is behind the photographer. The building is a maintenance of way shed (per Ian Wilson, Steam at Allandale.

p 262/3 THE STATIONS
Burlington Freeman station - re Note 2. The original GWR station built in 1856 (at that time called Wellington Square) burned in 1883, and was replaced by the GTR, successor to the GWR, with a similar GWR-design station somewhere between then and 1888. This second station burned down April 1, 1906. Courtesy Earl Chapman (FOFS - Friends of the Freeman Station.)

p 268 THE STATIONS
Cardwell Junction - re Note 2: As referenced above under pp150/1, this station was built, and its location was in the centre of the interchange loop, with the GTR freight house on the CPR side of the interchange, presumably by agreement with the CPR. (With thanks to Ralph Beaumont.)

p 325 CULVERTS, TRESTLES AND BRIDGES
The date of the Grand River bridge reconstruction at Caledonia was 1953, not 1952. (Courtesy Don Grove.)

Images from Port Dover to Hamilton