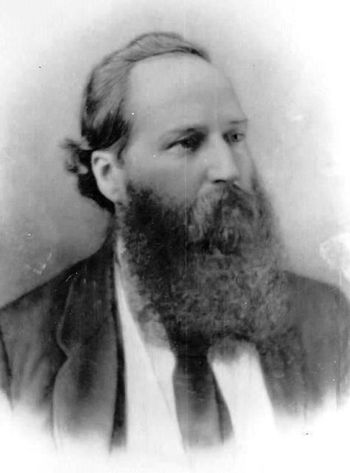 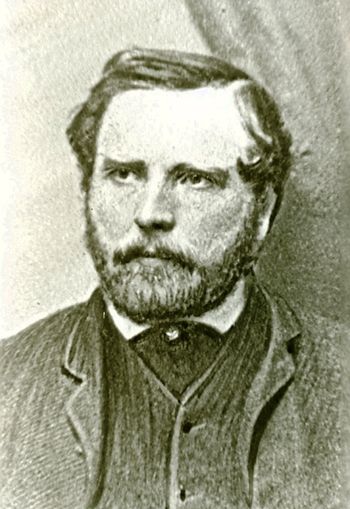 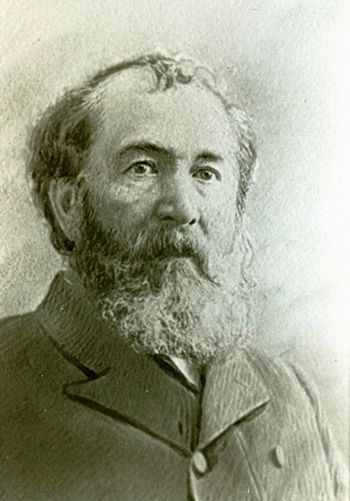 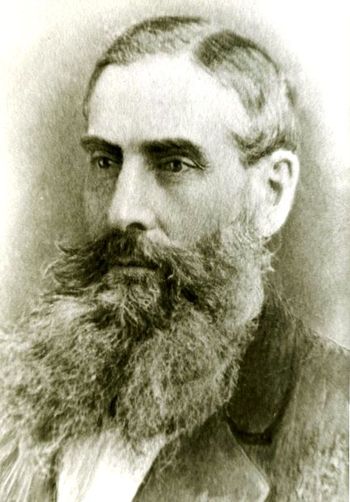 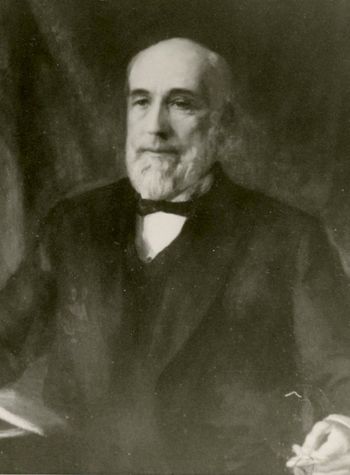 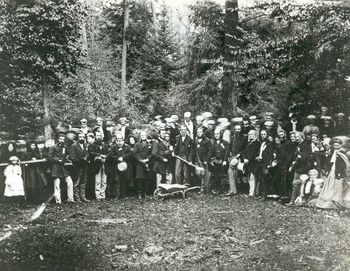 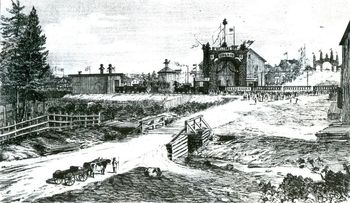 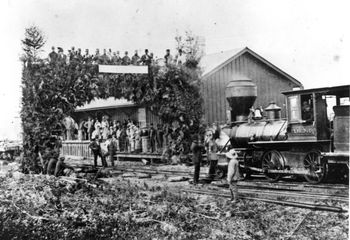 The Narrow Gauge Phenomenon in Ontario

The distance between the rails was an immediate issue at the very beginning of the railway itself. Remarkably, the question of the preferred gauge was settled very quickly in England where railways were invented and given to the world. George Stephenson, the inventor who made the steam locomotive a practical proposition, decreed that it should be 4’8½”, or 1435 mm, and that came to be adopted throughout western Europe, and was exported all over the world. This gauge came to be known world-wide as the “Standard” or “Stephenson” gauge. Not surprisingly, any gauge narrower than the standard gauge was defined as narrow gauge, and any gauge wider as a wide or broad gauge.

The Province of Canada enacted a financial incentive for the building of railways in 1849, and delegated its administration to the Railway Board of Commissioners, who decreed that in order for a railway to obtain that incentive, it had to build to the 5’6” gauge, which came to be known also as the "Provincial" Gauge. Essentially this decree defined Canada’s railway gauge for the next twenty years, contrary to the 4’8½” gauge that was by then rapidly becoming standard in western Europe (with the major exception of Iberia and Ireland) and, more immediately, also in the adjoining northern states of the USA.

Notwithstanding the increasing prevalence of the standard gauge in railways around the world, those railways that opted for a wider gauge claimed improved stability, higher load capacity and increased passenger comfort, but in some cases selected a different gauge from that of their neighbour for political, commercial and/or strategic reasons.

Those that opted for a narrower gauge did so usually for geographic reasons – in heavily undulating and mountainous terrain for instance, the required narrower land and infrastructure dimensions (such as for tunnels and bridges) made a narrower gauge an overriding logical and practical choice, and the 3’6” gauge became predominant among common carrier railways. Logical examples of the judicious use of the 3’6” gauge are/were in Norway and Sweden (since re-gauged), South Africa, Japan, Newfoundland (defunct) and New Zealand.

The obvious and overarching drawback of any difference in gauge between neighbouring railways has however always been the cost of transshipment of goods, and the inability to interchange freight cars as business is required to flow between the two railways, so that the choice of a disparate gauge always ought to be for overriding construction imperatives. This proved to be a painful lesson for Canada and Canada’s early railways, and the eventual costs of conversion to the standard gauge unquestionably altered the pattern of subsequent railway development in Canada.

In Ontario, the lesson proved to be the same – “short term gain for long-term pain” – as understandable as the reasons for opting for a narrow gauge may have been, it was a tempting economic choice, but not an innately geographically compelling one – and the outcome was inevitable.

The climate that encouraged the narrow gauge option in Ontario was in major part the railway financing mechanism that shuttered down in the aftermath of the Crimean War that ended in 1856, and remained more or less closed during the American Civil War that ended in 1865 (bearing in mind that much, if not almost all, of the financing came from British financial houses). During that period there was stagnation in further railway construction, a decline in government political will for financing support, with the result that there was increasing reliance on municipal bonuses, call them downloads, local levies, incentives or bribes, to finance local railways. The euphemistically described “bonus” was essentially a debentured municipal lump sum subscription to have a railway come through its territory. It was paid for the most part with a grudging acknowledgment that a railway was needed – in some cases there were threats by the railway to bypass if the commitment was not forthcoming, but many municipalities were smart enough to figure out that their location was strategically placed to the direction of the railway and were able to hold out for the best terms, including no payment until completion. That was an important negotiating point because it was not uncommon for a first section of railway to be built using funds obtained from bonuses in the second section – sort of an early pyramid scheme. Just the same, these “bonuses” constituted a huge long term liability for fledgling municipalities with, for the most part, modest tax bases.

The “mover and shaker” of the narrow gauge promotion was one George Laidlaw, a Scot who immigrated in 1855 to become a wheat buyer for “little brown jug” Gooderham & Worts, the prominent Toronto distiller (whose plant has been commemorated today as the Distillery District). He espoused the narrow gauge concept as rebellion against the monopoly and perceived financial excesses of the Grand Trunk Railway; and closer to home, as an effort to break the stranglehold that Toronto’s Northern Railway to Collingwood exercised over the price of cordwood, the key industrial, commercial and residential fuel of the day. Laidlaw argued passionately (and correctly) that the narrow gauge choice offered significant savings in construction and operating costs, arguments that resonated in the cash-strapped decade of the 1860s and resulted in the incorporation in 1868 of the Toronto & Nipissing Railway to the north-east; and its equally narrow gauge sister, the Toronto, Grey & Bruce Railway that was to strike out in a northwesterly direction from Toronto to Owen Sound to service railway-hungry Grey and Bruce Counties. The issue of the Toronto cordwood monopoly aside, the immediate incentive for the promotion of both of these railways was that their sponsoring distillery needed grain to make its whiskey.

For the Toronto & Nipissing Railway, there was an additional specific object: There was already talk of the planned transcontinental railway and entrepreneurs were quick to catch the enormous economic implication of such a plan – Toronto’s Northern Railway of Canada and Hamilton’s North Western Railway were salivating at the prospect for a connection to that vision. Thus the naming of the Toronto & Nipissing Railway was no random stab at a lake somewhere up in the north – it was a strategic strike towards the connection of all connections.

For the Toronto, Grey & Bruce Railway, it was to reach a port on Georgian Bay (at Owen Sound) to offer competition to Toronto’s Northern Railway of Canada to Collingwood that was disinclined to build branches to service the emerging lucrative farmlands of Grey and Bruce Counties.

George Laidlaw was the driving force behind four railways in all (The Toronto & Nipissing Railway [T&N], the Toronto, Grey & Bruce Railway [TG&B], the Credit Valley Railway and the Victoria Railway).

Of these four, the T&N and the TG&B were chartered (in 1868) while the 5’6” Broad Gauge was still a condition for the Province of Canada financing guarantee, and both were built to the 3'6" narrow gauge.

Both railways were an immediate success, hauling prodigious amounts of grain and lumber into the big City, and with impressive passenger traffic receipts besides. Within a few years, however, the inherent limited capacity of a narrow gauge operation became apparent, interchange with the Grand Trunk Railway (GTR) in Toronto became an issue, and both railways began to struggle to meet traffic demands. At the same time the light rails began to wear out and the accumulating costs of maintenance and renewal began to hover over their balance sheets.

By the early 1880s, this brave experiment was over. The Midland Railway (itself soon to be leased to the Grand Trunk) bought out the T&N in 1881 and assumed the cost of gauge conversion in 1883.

By 1880 the financial situation of the TG&B was equally dire, and control of the railway was handed over to the Grand Trunk in 1882 in exchange for the enormous cost ($800,000 [over $19 million today]) of re-gauging and re-fitting the line. The GTR did not however obtain a controlling interest, as it was financially stretched itself in its frantic bid to keep the CPR out of Ontario. In 1884, the GTR had to sell its TG&B stock, which was snapped up by the Ontario & Quebec Railway, the CPR’s unobtrusive cat’s paw bid to enter the lucrative Ontario market.